After having tried the e-bike -and buying (or lending) one- it was time to try one in real live. To promote the use of the (e)-bike, Brightlands Chemelot Campus organized a Cycle Tour on June 23.

After having enjoyed a lunch in Center Court, a company of about twenty cyclists left the campus for a 6 km bike tour. Animated conversation among the cyclists started right after departure, as far a traffic allowed. Destination: the Tom Dumoulin Bike Park in the Sportzone at Sittard, which was recently inaugurated by the famous Giro winner. The participants of the Cycle Tour had ample opportunity to test their bike in this “safe cyclist arena”, where no other traffic is allowed. There was a prize for the company with most participants to the cycle tour: ARLANXEO – congratulations. After one last round over the bike park, food and drinks were available to make the ride back to the campus more convenient. All participants gladly donated to the SOS Children’s Villages. 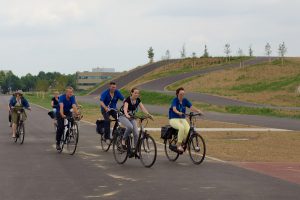 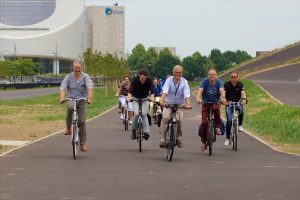 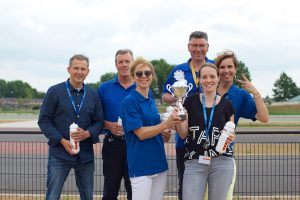 If you fancy trying the bike park yourself: the park is open for free until next October 1.
Check out the opening hours at sportzonelimburg.nl.